Busting the Myths of Mardi Gras

We have gone nearly coast to coast in a short time, from Palm Springs, California, on Jan. 29 to Pensacola, FL, on Feb. 14 in time for our first Mardi Gras. We learned a lot. Let’s bust some myths! (If you have any trouble viewing this post, WordPress viewed on Chrome is to blame for eliminating spaces between random words and crunching them together. If you are seeing this problem, try viewing it in Internet Explorer or Mozilla instead.) 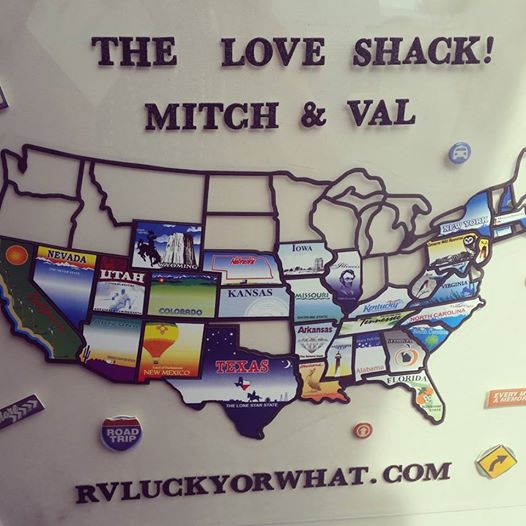 When we first conceived of this year-long RV trip, we put New Orleans (NOLA) for Mardi Gras on the list. But after talking to experienced visitors and Mardi-Gras attendees, Mitch and I decided we wanted my first visit to New Orleans to be a more authentic native one, not the craziness and (we heard) crushing crowds of Mardi Gras. We wanted to be able to stay together, sit down for a meal at a restaurant or a drink at a bar, and be able to use a bathroom whenever.

So, we picked Biloxi as a central Gulf of Mexico Coast location to be able to reach the Mardi Gras fun all along the Gulf Coast…which brings me to myth #1:

Myth #1: New Orleans = Mardi Gras. The idea that you must go to New Orleans for Mardi Gras is a continual source of irritation to Gulf-Coasters. Mardi Gras is a big deal everywhere along the Gulf Coast from Galveston, Texas, to Pensacola, Florida (and further…having  originated in  medieval Europe). Every town worth the salt on its beaches in the US states of Texas, Louisiana, Mississippi, Alabama and Florida has numerous parades, events, crowds, and madness. Mobile, Alabama, is actually where the Mardi Gras tradition originated in 1703(!). Locals in Biloxi, Mobile, and elsewhere told us that Mardi Gras in the French Quarter of NOLA is downright dangerous,  even violent. Crime is high. Visitors flood New Orleans for the few days leading up to Mardi Gras, and proceed to get as drunk as possible. It’s hard to find parking, food, drinks, or a bathroom in NOLA on Fat Tuesday. Considering our rather new RV, and my surgery-and-11-months-of-recovery after a rotator cuff tear sustained when a drunk kid picked me up and dropped me on New Year’s Eve in Las Vegas 2011/2012, avoiding NOLA on Mardi Gras was the right decision for us.

Val and Mitch loaded with beads in the park during Mardi Gras in Mobile, AL. We quickly became less interested in volume, and more interested in unusual beads.

“If you turn around for a second [on Bourbon Street during Mardi Gras], you’re likely to lose your friends in the crowd.”

“You can’t bend over to pick up something thrown from a float [in NOLA] without being knocked over.” 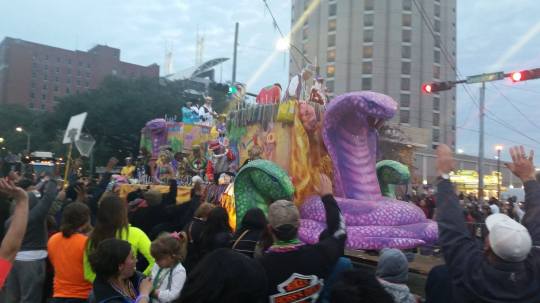 Mobile is the original home of Mardis Gras. The Le Krewe de Bienville parade was one of six Mardi Gras parades in Mobile, AL, on Saturday, February 15, 2015. The same floats travel to appear in multiple parades from Galveston to Destin in the same Mardi Gras season.

A  couple of people (like two) said  this  concept of “fear and crime in NOLA”  is  not really true (or it’s just as true in other Gulf Coast cities for Mardi Gras), so  we took these comments from locals from competing Mardi Gras towns with a grain of salt. We actually love crazy parties — nay, we pursue them — but I didn’t want that kind of crazy to color my first visit to NOLA. NOLA is crazy all the time. We’ll be there for my birthday on Feb. 27th and that will be crazy enough. Many experienced Mardi-Gras goers told us we made the right decision not to go to NOLA for Mardi Gras.

Feb. 14 is not just for Valentine’s Day on the Gulf Coast: beads flew like missiles from floats at the Pensacola Grand Mardi Gras parade in Pensacola, FL. We were covered in more beads than we knew what to do with in a couple of hours. And that was our first of about eight parades!

Myth #2: Beads = Showing Your Boobs. The parades are where you get the beads. The parades happen numerous times (six in one day in Mobile)  in numerous cities. The parades are often family-oriented (there are parades for kids, teens, even pets). The parades dump thousands of boxes of beads during Mardi Gras season. Every man, woman and child (and dog) who wants beads can be covered in them up to their noses in no time. The night  after our first parade in Pensacola, Mitch says he experienced startled “body twitches” as he fell asleep, as his brain hadn’t yet recovered from dodging knots of hurtling beads thrown from floats. We were happy that we wore sunglasses to protect our eyes. None of us showed our chest areas. That is just not my STEEZE, man. There is a time and place for that, and it isn’t in public. It costs a lot more than beads to see my upper anatomy; it’s a privilege, darn it.  ‘Cuz it’s very nice. Ha ha. 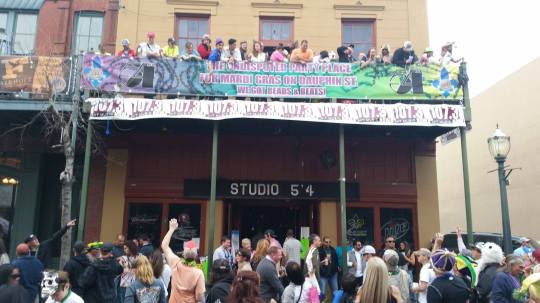 Grand Central Bar, Dauphin Street, Mobile. “Show yer tits!”…?? Nah, totally unnecessary. I mean, there might have been someone yelling that, but I didn’t hear it. I didn’t see any women flashing either. People were just having fun throwing beads and balls back and forth.

Myth #3: Mardi Gras = Fat Tuesday. Actually, Mardi Gras is celebrated for a month up to Fat Tuesday. Parades and festivals and events take place all month long, which this year went from Jan. 17 to Feb. 17, 2015. Participants “party it up” before the beginning of Lent, the Catholic period of self-denial and sacrificing of bad habits. The day after Fat Tuesday is Ash Wednesday, when Catholic-oriented Christians go to church to get blessed with a cross-shaped ash on their forehead and take home a palm frond (so I hear…can you tell I’m not Catholic?). Ash Wednesday marks the beginning of Lent.

Mardi Gras is all about King Cake. Pinnacle Vodka makes a “King Cake” flavor. When we asked what King Cake was, the Pinnacle Vodka promotions girl said, “Ya’ll aren’t from around here, are ya?” It’s a simple sweet yellow cake colored with the Mardi Gras colors of purple, gold, and green, in which a plastic baby Jesus is hidden (it looks like any plastic baby, honestly. Jesus didn’t have a beard as a baby.) The person who gets the plastic baby in their slice of cake will have a lucky year and will buy next year’s King Cake.

Myth #4: The Mardi Gras parade goes down Bourbon St/ Dauphin St. Actually, the French Quarter in NOLA (aka the Bourbon Street area) and the bars and restaurants of Dauphin Street in Mobile are surprisingly NOT on the parade route. The parade goes near there (on Canal Street in the case of NOLA), but the bar areas are closed down  for blocks just for pedestrians, and  that’s really where the action (or craziness) is. Mostly the party and bar scene is for adults (although you still see families there), and the parade routes are more family oriented.

Hold my beads, baby. This was at a bathroom stop driving back to Biloxi after an afternoon parade on Saturday, Feb. 14th in Pensacola, FL. It was our first parade when we thought we should grab as many beads as possible.

Oh yeah. By the way, it can get VERY COLD for Mardi Gras! 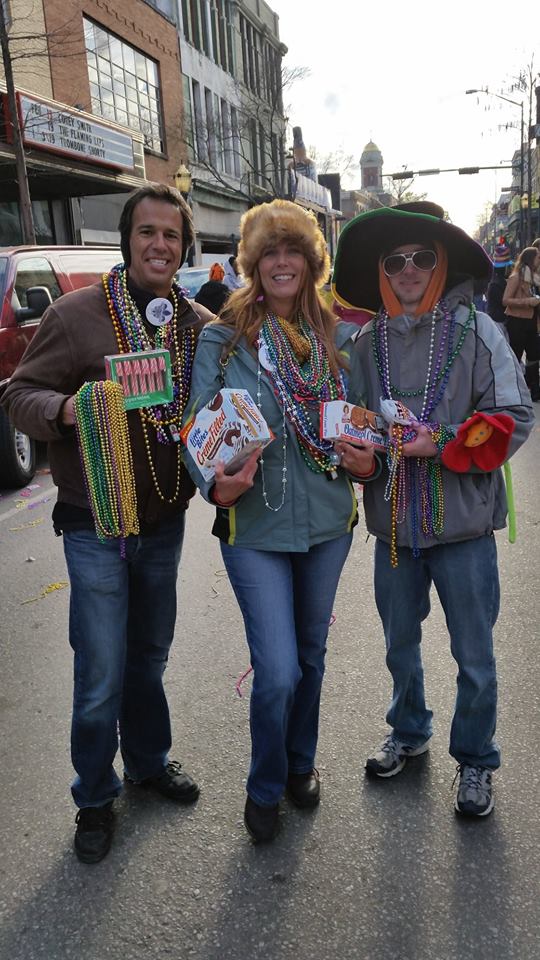 I thought we did away with the need for ski parkas but we had ice on our RV awning after it rained overnight in Biloxi. At the last Mardi Gras parade on Fat Tuesday in Mobile, the float riders were throwing entire unopened boxes of candy, moon pies, Little Debbie cupcakes, oatmeal crème cookies, and unopened plastic bags of beads. You couldn’t put your hands down much less look away, at the risk of being beaned and injured. 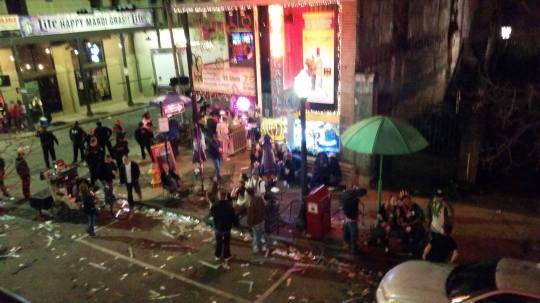 From the Grand Central bar balcony on Dauphin Street in Mobile, you can see a mess of bead wrappers and broken beads as the night winds down Feb. 17, the Saturday night before Fat Tuesday.

The bottom line? Pensacola was fun but two hours away from our RV site in Mobile. We were only there to pick up our friend from the airport (Mike Y from Ohio, our buddy  we met in  Key West and as a non-drinker, our priceless designated driver) and stayed to see our first Mardi Gras parade down Palafox Street in the Seville Quarter of Pensacola. Biloxi had casino fun but not a central downtown area since the last hurricane blew it away (thanks, Katrina) and no party scene that we could detect for Mardi Gras. We did find a parade in D’Iberville near Biloxi, but it was family central, and not in a very interesting location. Mobile, on the other hand, had a busy,  happening Mardi Gras scene and that’s where we drove an hour to be day after day, even though we were staying in Biloxi.

We’ll hit Grand Isle, LA, next, a remote oasis  on a barrier island on the Gulf to see some birds, get some work done, rest, and do some repairs to the RV and our livers. THEN it will be time to hit NOLA for my birthday!

Read what happened on our actual trip to NOLA for my birthday!!   When Good Dreams Come True

In case you missed it:   Ten Reasons Why Death Valley is to Die For

Also, track where we are today:   Where You Guys At?