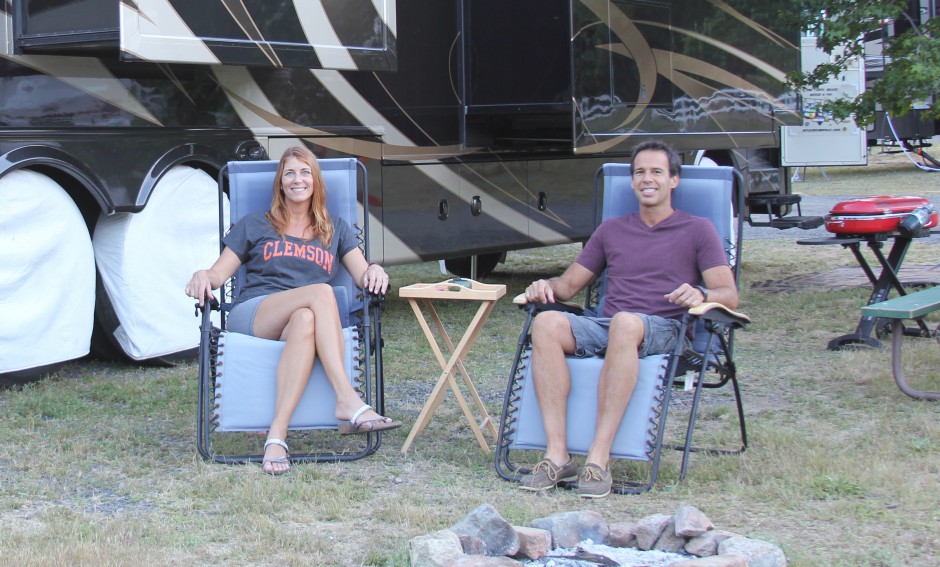 Why is Charleston So Charming?

Travel + Leisure voted Charleston the “Best City in America” for 2015 — for the third year in a row! My first visit to Charleston in October 2015 was long-anticipated. For years, I’ve heard people say how much they love this southern city on the South Carolina coast.

“What do you like about it?” I would ask.

A typical response would be maddeningly vague: “Oh, it’s wonderful! The history! The art galleries! The architecture! You have to visit!” But I wondered, what’s it really like? Would I like it as much as everyone says?

And does it really qualify as the Best City in America?

For decades I lived in Boston with its even longer history. I’m a vegetarian who doesn’t care for most Southern comfort food. And doesn’t Charleston get a lot of rain and even hurricanes there (like Boston)? Call me a skeptic. And we only had a week, during which Mitch had two days of business travel. But let me try and answer the question better than I’ve heard it answered … Why is Charleston so charming?

First, Charleston is essentially a peninsula surrounded on three sides by water views, so it’s very scenic, and it’s still a busy Atlantic port. The town was founded in 1670 (Boston = 1630), and is known for its well-mannered, friendly people. It’s been voted America’s most friendly, most polite, and hospitable city by various entities.

War has not been kind to Charleston, which has a history as a focal point for occupation and fighting in both the American Revolution and the Civil War. South Carolina was the first state to secede from the United States at the start of the Civil War in 1860. Charleston suffered from fire and bombardment by Union forces, then poverty during a period of reconstruction.

Mother Nature has not been kind to Charleston, either. In 1866, Charleston was devastated by an earthquake estimated at 7.3 on the Richter scale. Buildings that survived were fitted with earthquake bolts that go straight through from one outer wall to the other. In 1989, the city took a direct hit from Hurricane Hugo, causing $2.8 billion in damage.

Mitch and I arrived just a week after a historic low pressure system associated with Hurricane Juoaquin caused extensive rain and flooding. But the citizens of Charleston are steadfast. They rebuild again and again. As the Travel + Leisure article mentions (but doesn’t really explain), this resiliancy is part of what makes Charleston charming.

Think pink! It’s a common building color in Charleston.  See the side porch? Note the horse and carriage (center), a popular way to receive a guided tour of the city, if an annoying traffic obstacle to residents.

The city features impeccably landscaped gardens, moss-draped antebellum (pre-war) mansions with carriage houses and side porches, and amazing waterfront views. The symbol of South Carolina, the palmetto tree, grows abundantly along the streets. Pelicans grace the waters, and a plethora of crabs mind a maze of tidy round holes on the beaches and tidal flats. Bats were flying around the residential chimneys in a downtown neighborhood when I captured this picture of the crescent Moon beside a palmetto tree, a spitting image of the icon on the state’s flag and crest.

What we didn’t find in Charleston is a waterfront area bustling with restaurants and shops, like nearby Savannah, Georgia. Instead, the waterfront is reserved for recreation and the enjoyment of all. You can walk, jog, or bike along the waterfront with its fountains and southern gardens.

The best restaurants are scattered throughout the city, with a particularly nice selection downtown in the area bounded by Market St, King St, and Broad St. We enjoyed numerous eateries and world-class restaurants during our week-long stay, including Husk, Charleston’s hottest new Southern low country (coastal Carolinas) restaurant run by chef Sean Brock — and for that one, you’ll need a reservation. 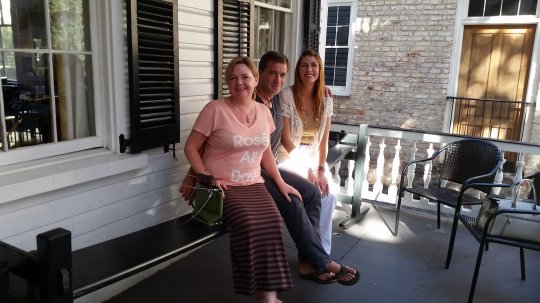 Discovering a Southern “joggling bench” (a bench on rockers) on the porch at Husk with friends Tracy (left) and Patrick Marshall (center).

Speaking of Market Street, this downtown Charleston street is home to an indoor and outdoor market that was established in the 1790s. While downtown, take a horse-drawn carriage tour, where a knowledgeable guide will give you an informative orientation to the charming historic district. For tickets, see Old South Carriage Company at 14 Anson St.

We did find waterfront dining on a deck overlooking the Ashley River far from the bustle of downtown; California Dreaming had a lovely view and a nice cocktail selection, but they didn’t have much for my vegetarian palate, in spite of being known for having “Charleston’s Best Salad.”

Enjoying southern cocktails on the Ashley River in Charleston at California Dreaming…I was dreamin’ of a big salad that doesn’t feature meat (alas, it IS the South).

We also had an elegant dinner at Slightly North of Broad, known for its location slightly north of Broad Street, and the acronym spelled out by its title (SNOB). I had a butternut squash bisque with creme fraiche that wowed me.

If you love BBQ, rich meaty sauces, and seafood, the menus in Charleston will make you swoon. Me, I’d exchange those for a few more healthy, yummy plant-based entrees on the city’s elegant menus. However, a week isn’t enough time to begin to try the variety of restaurants there!

For a water view, rooftop bars and restaurants are a specialty in Charleston. We enjoyed the artsy, eclectic curiousities at The Rooftop at the Vendue Hotel, as well as the outdoor venue by the pool. Crreative craft cocktails there will cost you, but it’s worth it just for the view.

Mitch “pinning” himelf against a wall sculpture installation at The Vendue Rooftop.

While we were camped there in mid-October, James Island County Park was setting up for an expansive and world-reknowned Holiday Festival of Lights. As I explored the network of bike and hiking trails around the park, I came across space ships, mushrooms, animals, and every conceivable type of holiday lighting and decor you can imagine. It was weird to see in mid-October, but I’m sure it’s must-see event during the holidays.

The Love Shack at her site at James Island County Park. We felt like we didn’t have enough time at this incredible place!

One afternoon, we headed out to see the 1500-year-old Angel Oak, a live oak tree claimed as the largest living thing east of the Mississippi, but found the gates locked after 5 pm. However, the tunnel of moss-draped live oak we drove through to get between Angel Oak and Kiawah Island (another great destination), was amazing and inspiring. Unfortunately, my cellphone aimed out the sunroof of the Velsoter couldn’t capture the experience while moving, and traffic was heavy, so you’ll have to imagine it!

Is Charleston charming? Absolutely! Is it the number one city in America? Many people think so!  I’m not sure. How can you pick just one? I found Charleston had similarities with other southern cities like Savannah and New Orleans, and with historic port cities like Boston. We certainly had fun and I would gladly have stayed much longer to explore all this Southern region has to offer!

See you in the warm places,

Next post: Key West: The Good Life for RVers