I lived in the Boston area for 24 years from 1990 to 2014, and sometimes friends ask me where they should go and what to do when visiting Beantown. I lived mostly along the I-495 “tech corridor” in Marlborough, Sudbury, Shrewsbury, Franklin, Natick, Boxborough, and Acton. I worked all over — in Framingham, Natick, Norwood, Worcester, Boston, Cambridge, Medford, Chelmsford, Nashua N.H., and S. Andover (unless I forgot something). I commuted to Boston and Cambridge for about 7 years via the commuter rail and driving — sometimes 4 hours a day. Ugh.

Boston is not a great city to drive to, or drive in. Needless to say, I did a lot of walking around the city, and it’s an inherently walkable city. Like Paris. In fact, Boston and Paris have a lot in common. I have a love/hate relationship with both of those cities, Boston and Paris. At the risk of pissing off a lot of people who LOVE these cities — I mean no offense, but if you know these cities, you know the traffic sucks. Drivers are super aggressive. There’s no parking and if you find it, you have to pay through the nose for it. The weather sucks (you can’t deny it — Paris has no A/C in the summer, and Boston gets more rain per annum on average than Seattle. Way more). The strangers you come across are mostly assholes (that’s why the word Masshole is a thing)– don’t bother saying hello to anyone (they don’t respond) or trying to be chatty with a clerk (in Paris, they will rudely tell you stop talking because your French is terrrible; in Boston they will think something is wrong with you and wonder what you WANT from them). If you sit still long enough, panhandlers hit you up for handouts. But the history is amazing. A big river runs through both cities. The Hancock Tower is a gorgeous central piece of architecture like the Eiffel Tower is to Paris (okay it’s a stretch but they both tower over their surroundings and are beautiful). The food is world class. Meh, I guess they’re both okay.

One fun way to see the city is to take an amphibious Duck Tour (www.bostonducktours.com). Tours leave several times a day from the Museum of Science, the Prudential Center, and the New England Aquarium. The open-air buses give a tour of the city by street, then a 20-minute ride down the Charles river. Tickets are $42.99/adult, $34.99/seniors and active military, $28.99/children.

A lot of tourists to Boston do the Freedom Trail, a 2.5-mile walking tour of Boston that goes from the Bunker Hill Monument to the Boston Common and the Massachusetts New State House. If you follow the Trail, it takes you to 16 different historic sites, including the Park Street Church, the Paul Revere House, and the Old South Meeting House. The Old State House and site of the Boston Massacre are on the Trail, along with Fanueil Hall and the USS Constitution. The Old North Church is on the Freedom Trail, where Paul Revere looked for the lanterns signaling “one if by land, two if by sea.” Also on the Trail are some of the oldest cemeteries in the U.S. Most of the Freedom Trail is marked by a red brick stripe implanted in the sidewalk.

You could spend half a day or you could spend several days just enjoying the historic destinations along the Freedom Trail. But I have always preferred a path that takes you from the waterfront to Back Bay. I call it the Val Tour.

I have taken many a visitor to Boston along this path, including kids and older folks. You do need to be able to walk a few miles, so wear comfy walking shoes. But it’s worth it. You’ll see so much more by walking than you would by car or on the “T” (Boston’s subway/tram system, which is mostly underground). Make sure your phone is well charged to help you navigate from point A to B.

Val’s favorite walking tour path is about 3 miles long, from the Aquarium to Newbury Street. Google maps says it’s an hour, but it’ll take hours with all there is to do and see.

The Boston Waterfront from the New England Aquarium

The harbor seal exhibit at the Aquarium is free!

2. Parking at the Aquarium is about as expensive as parking can be anywhere (last I checked, $39 for anything over 1 hr 20 mins). GAHHHHH! So if you can park anywhere else – do it. Parking is cheaper at nearby Fanueil Hall garage but still over $20 on weekdays, $15 on weekends. Better yet, leave the car at one of the far ends of the “T” (Boston’s Metro Transportation Authority, MBTA or subway system, the oldest subway in the world!) for the day and take the T to the Aquarium. For example, coming from the west of the city, I would park at Alewife Station in Cambridge for the day and take the T to the Aquarium. You could also park at Riverside Station or Oak Grove, depending on where you’re staying. 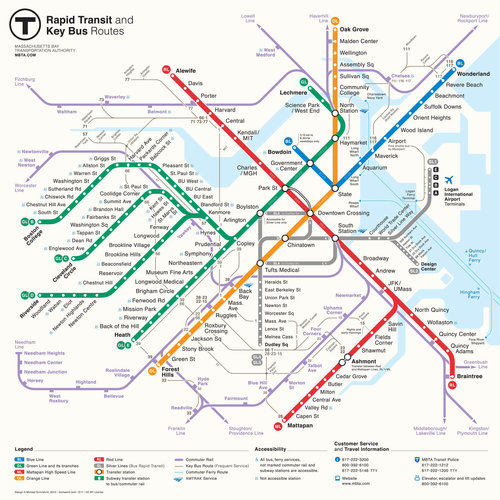 3. From the Aquarium, I like to walk north along the Boston Harborwalk a bit. It used to be that you couldn’t walk along Boston’s waterfront. But since 2000, about 38 miles of waterfront have been purchased from private and corporate owners to create public parks that are mostly linked up. So you can walk much of the waterfront’s parks and paths now. From the Harborwalk, turn (L) on State Street or Mercantile St. to head to Fanueil Hall and Quincy Market. The Fanueil Hall Marketplace is historic and has two rows of outdoor pedestrian shopping and eateries. Walk through Quincy Market “The Great Hall,” and out the other side.

4. Head toward Congress Street and turn (L) on Congress. After about a block turn (L) again on Devonshire St, to the Boston Massacre Site. 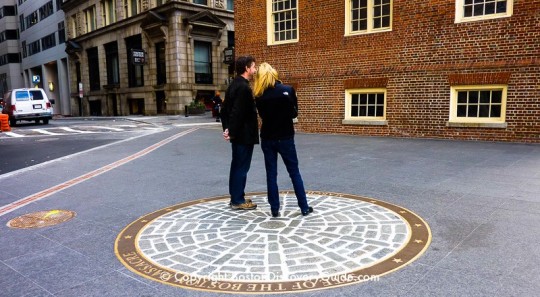 Boston Massacre Sight, where the British Redcoats killed 5 American civilians in 1770, sparking outrage that led to the American Revolution.

5. Follow Devonshire St. to take a right on Water Street to Downtown Crossing, which is a bustling pedestrian shopping area centered on Washington Street and Summer Street, marked by Macy’s and the Jeweler’s building – where any suitor in Boston heads to get the best deals on diamonds.

6. From Downtown Crossing, turn R onto Summer Street (west) toward the Park Street T Station and Boston Common. Be careful crossing busy Tremont St. and head to the Brewer Fountain on the Common. Pick up the Freedom Trail and head across the Common toward the State House, the state capitol building of Massachusetts. You can get a nice view of the State House without leaving the Boston Common. The dome on the State house was originally wood, and when it leaked it was covered in copper by Paul Revere himself in 1802. He was a silversmith and…coppersmith! The dome has quite a history; in 1997 it was gilded with 23k gold.

7. From the state house, walk through Boston Common toward the Boston Public Garden swan boats. You must cross busy Charles Street. You could spend all afternoon in the Gardens, looking at flowers, watching people paddle the swan boats. Don’t miss the iconic statue of George Washington.

Founding father Geo himself in the Boston Public Garden.

8. But rather than fritter away the whole day in the park, I like to keep going toward Trinity Church in Back Bay. The monolithic Hancock Tower, Boston’s tallest building (and where Val worked on the 52nd floor at a solar industry analyst firm in 2007) dwarfs the Trinity Church, which is reflected in the mirrored sides of the Hancock Tower. This is Copley Plaza, a great people-watching place and it’s very photogenic. If you cross the street from Trinity Church toward the Hancock Tower, you’ll see the Fairmont Copley Plaza Hotel to the right. This is a gorgeous historic motel, and you can go right in AS IF you’re staying there and use the bathrooms just inside the lobby! Ha ha. I do this every damn time. The bathrooms are marble and gilded and they smell nice. 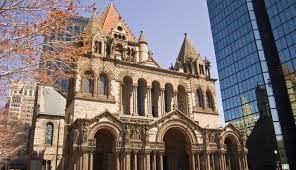 Go in to the Fairmont Copley Plaza through this awning. Bathrooms are on the right. Somebody always needs to go at this point of my tour. At least usually me.

9. From Copley Plaza, I like to cross over Dartmouth Street and go into the Westin Copley Place, a high-end mall and another nice place to people watch. From this mall, you can walk all the way to the Prudential Center indoors. In Boston in the winter time, as a commuter, this was a great way to go several blocks indoors! Even in the summer it rains a LOT, so you can walk through the Westin Copley Place, toward and past the Sheraton, and cross over the street in the pedestrian walkway overpass toward The Shops at Prudential Center.

Go in through this corner entrance of The Westin and take the escalator up to the high-end mall.

10. To end the tour, head to the Skywalk Observatory at the top of the Pru. You’ll get a sky-high vantage point of Boston with an audio tour and a 360-degree view. The last admission is at 9:30 pm during the summer, and is $21/adults. In my tour, I like to be there for the sunset.

From the Skywalk Observatory at the top of the Pru, you can see the Charles River, the Hancock building, and all of Back Bay and Downtown.

Added bonus: From there, if you have time for dinner, continue walking through the Pru Center toward the Hynes Convention Center and out onto Boylston Street. Head to Newbury Street via one of the alphabetical cross streets (Arlington, Berkeley, Clarendon, Dartmouth, Exeter, Fairfield Gloucester, or Hereford Streets). You’ll be closest to Hereford Street. Newbury Street is full of antique shops and outdoor eateries of all kinds. Get dinner at an Asian Fusion restaurant, or go for Italian at Papa Razzi. You’ll need a reservation if it’s a Friday or Saturday!

Valerie’s Great Aunt Gladys owned an antique shop on Newbury Street back in the 1960s. I never got to see it but I still have some of her curios.

Boston and the New England region has so much more to see. In an extended visit, I recommend Salem, Cape Cod, and the White Mountains of New Hampshire. But this is a good start if you only have a half a day to explore and get a feel for the city. Cheers!

Posted by RVLuckyOrWhat in Uncategorized