What’s the BEST THING We’ve Seen or Done in One Year of Full-Time RVing the US?

We left our sticks & bricks home in Massachusetts forever on August 14, 2014, driving away in our brand new Thor Tuscany 45-foot motorcoach for a year or more traveling the US.

Taking delivery of our new Thor Tuscany in June 2014.

We sold our homes, sold a lifetime of belongings, dropped of the kids at college, continued our jobs on the road, and have had the kick-ass adventure of a lifetime this past year, and have seen so much of the US! We have learned so much!

People commonly ask us — What’s the best thing you’ve seen? — an impossible thing to answer, because it’s entirely personal, based on our pre-RVing experiences, values, prevailing weather and our mood at the time. In one year, we have hit 42 states and have driven 25,000 miles in the RV with an additional 15,000 in the Hyundai Veloster tow car.

We have stayed at well over 100 different sites, including luxury RV resorts, campgrounds, RV parks that resemble parking lots, state parks, and national parks. We have managed to completely avoid an overnight stay in the parking lot of a 24-hr  WalMart!

But we do have some answers!!

What is THE BEST THING we’ve seen??

Okay, well, we’ve had so many experiences, we can’t just name one. They’re all different! So many of our experiences were absolutely awesome! So we each named our top FIVE “Best Things!” to see what floats to the top.

Top Five for Mitch (in no particular order):

I have family members working at Vegas resort-casinos that made our New Year’s Eve super ridiculously special with an exclusive invite to the MGM Grand VIP party.

We rented a Jeep to take the 6-hr round trip to Racetrack Playa, which requires a high clearance vehicle. 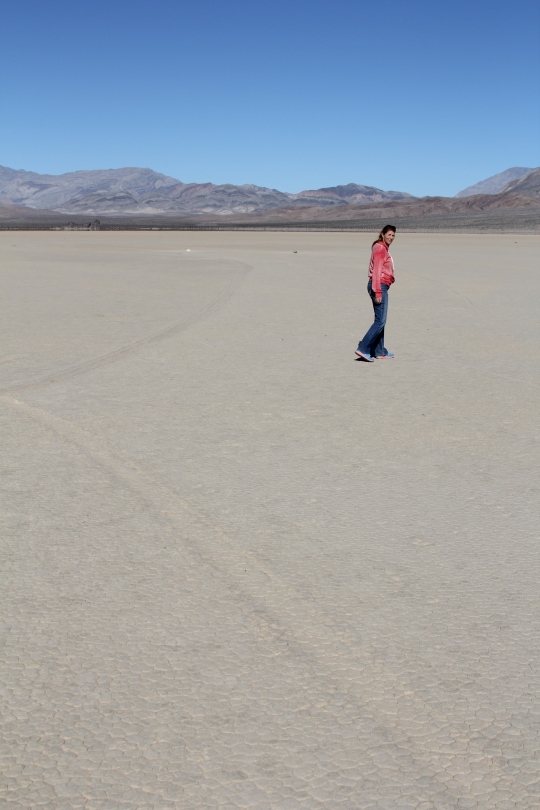 We made it a whole-day excursion by taking off on a one-track dirt road nearby, which took us up hair-raising, muddy and sometimes snowy cliff-side roads in one of the most remote areas in the US in January. All we had was a crude map and a sense of adventure. (We also had an emergency 911 beacon box in case we got into trouble — we don’t have a death wish!)

This video shows a bit of why it was such a thrill:

P.S. The mysterious rock movements have been explained by natural phenomena, but I’ll leave it to the reader to figure out the explanation. Some folks like leaving it a mystery.

This has to be one of the most beautiful trails in the US if not the world! We aren’t kidding. Glacier isn’t called the Switzerland of the US for nothing: 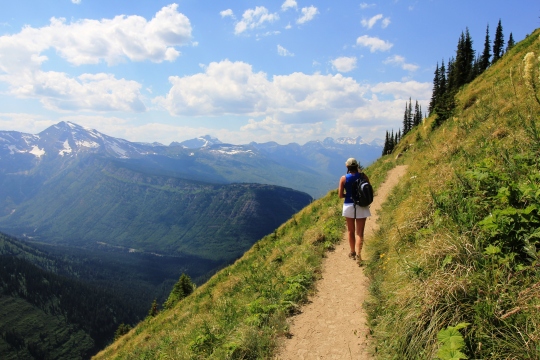 Highline Trail in Glacier National Park, starting from the Logan Pass Visitor Center, traces a narrow ledge for tens of miles, revealing a new spectacular vista around every bend. 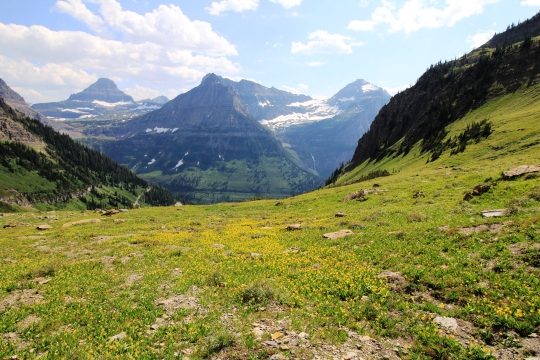 The wildflowers on the Highline Trail in Glacier around the 4th of July were incredible! The frequent appearance of alpine squirrels and yellow-bellied marmots made Val break into jubilant song: “The hills are alive…with the sound of ground squirrels.”

What’s not to like??? Summery weather nearly all year round, fun visitors and friendly locals, historic sights frequented by pirates and Ernest Hemingway, all combine to make Key West a favorite that we’ll be going back to again and again. 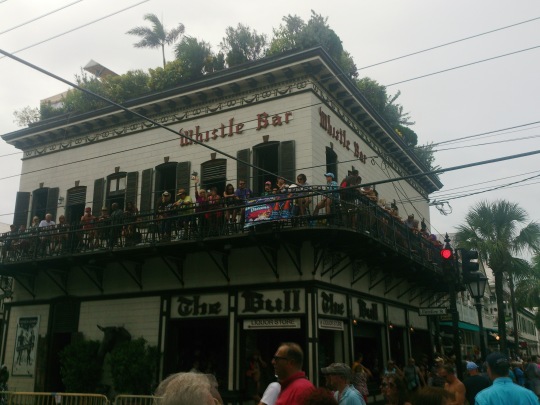 The Bull and Whistle Bar, a famous landmark on Duvall Street in Key West is always hopping with live entertainment.

The idyllic Bluewater Key RV Resort: a private dock and thatched-roof living area all to yourself close to Key West. We are planning to visit again this fall!

Coachella has come a long way since Val’s visit in 2006. The festival was well managed in 2015 to keep tens of thousands of participants moving, fed, entertained by up to nine simultaneous musical acts and innumerable stunning art and performance-art installations, and cool in the heat of 90- to 100-F weather in Indio, California, in April.

We were most impressed with how beautiful the Coachella fairgrounds are, and how participants rise to the occasion in celebrity-worthy attire.

Glittery butterfly art, ferris wheel, abstract lit up “trees” and the natural beauty of the palm trees and mountains of the Palm Springs area — we have a winner in Coachella Music and Arts Festival!

And of course — seeing AC/DC in concert at Coachella was another bucket list item!

We won’t be in the Palm Springs area for April 2016, but we look forward to attending Coachella again someday soon!

Check out more about why we loved Coachella and how it compares to South By Southwest in Austin here.

This was number six on Mitch’s list, but as I limited us both to five, I’m stealing it. The crazy pictures and video we got of hundreds of bison behaving badly this July in Custer State Park will never cease to be entertaining. These creatures are beautiful and mind-blowingly massive — their top weights of 3500 lb make them the largest land-dwelling mammal in the US.

This huge bull bison in rutting season seems to say to the female cow bison: “I’m such a badass! Watch me block traffic in both directions by laying down on the double yellow line.” A disinterested female goes to move around him.

And this video of a bull bison growling loudly to impress this chosen female is representative of what we heard from many of the bulls when we were stuck for an hour in a “bison traffic jam.” We had never heard such a thing!

Early on in the trip, we drove the 17-mile scenic drive through Monument Valley in Arizona. We were absolutely blown away, enchanted, and happy that the Veloster survived when the Navajo guides said it wouldn’t.

Totem Pole, Monument Valley, is a frequent backdrop in John Wayne’s movies — he loved this place. It looks to the world like a fake movie backdrop, but it’s REAL!

3. Singing on Bourbon St. with a live rock band in New Orleans:

We were in NOLA one-week AFTER Mardi Gras (on purpose — read this post if you don’t know why), and I fell in love with this dirty, stinky, seedy city — because live music pervades every nook and cranny. And I got to be part of it!

I mean, you may know I karaoke my tail off on a regular basis, but being invited to sing onstage in the Music Capital of the US (Nashville ain’t got nothing on NOLA), on the number one touristy street, even if it was just a Wednesday, with a live band that I’d never met, and to do it well enough that they actually invited me back for a set the next night was a thrill for me. I felt like Ferris Bueller singing on the parade float on his day off!

The band “The Remedy” at the bar and nightclub “The Swamp” didn’t even know it was my birthday when they asked me to come back and sing lead on Pat Benetar’s “Hit Me With Your Best Shot” and “Heartbreaker.” 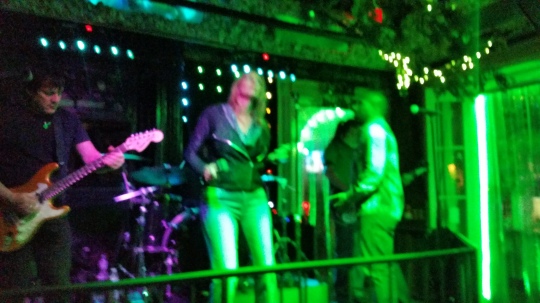 Singing to a live crowd spontaneously with a real band was kind of a dream come true for rocker-wanna-be Val.

Mitch took video with my phone, which has the poor quality of a cell phone, but it could be worse:

4. Seeing my first live manatee in the wild in Homosassa Springs, Florida:

These graceful sea creatures called manatees are endangered. They are massive, and can grow as big as a bull bison to 3500 lb! And they are so gentle that they have earned the name sea cows. They are mammals and breathe air. They are fascinating and seeing them was a big bucket list item for me.

Homosassa Springs State Park is one of the only places in the world where you can swim with manatees.

We didn’t manage to have a close-enough encounter to get a picture, as a matter of fact, we lost our underwater camera — (let us know if you find our red Olympus at the bottom of the Homosassa River!) but it made a big impression on me. Catch up on what happened on our adventure trying to find manatees here.

What. A. Thrill! This first sighting was not only checking a long- awaited bucket list item, it was most fulfilling for the close nature of the encounter (which couldn’t be prevented) and the pure adorable-ness of the goat’s appearance and behavior. 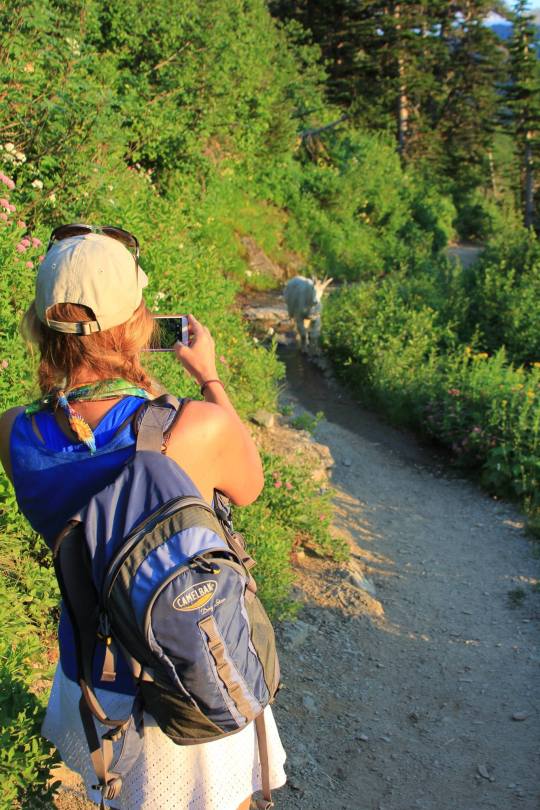 You can’t see it, but I’m sporting a huge smile here and bursting with excitement to see my first mountain goat! And such a beautiful one at sunset on the spectacular Highline Trail in Glacier!

If you haven’t seen the incredibly lucky video I got of this gorgeous mountain goat, check it out! I never tire of it.

With us, you can start to see some common themes:

So what’s the **winning** BEST THING?

We might *possibly* agree if held at gunpoint that Glacier National Park was the best thing we’ve seen this year. It’s the only thing that made both of our lists.

But we have a list of things that impressed us enough to draw us back for year two. YES — year TWO! We plan to slow down our pace and spend more time in the places we love:

See you in the warm places!

About Us: Runnin’ Down the Dream

Where are we today?

Close Encounters of the Wildlife Kind